Create a life you love. 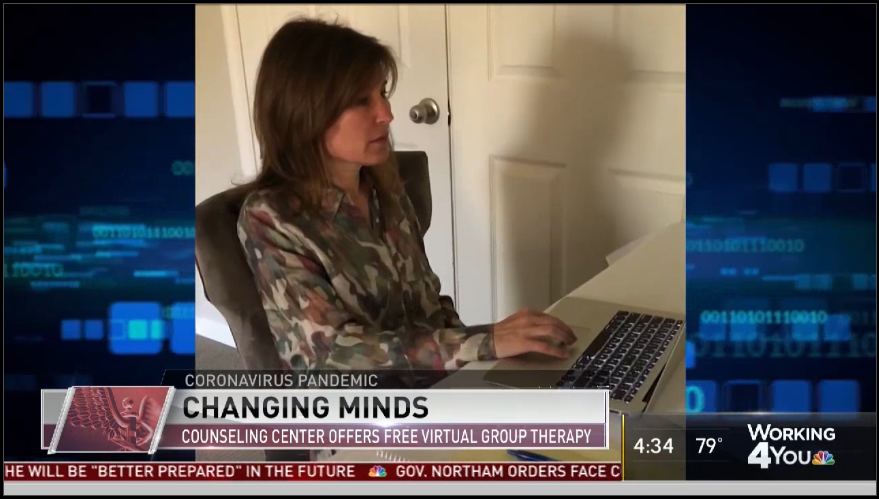 Jodie Fleischer: Many of us have grown accustomed to connecting online, during this pandemic, because we can’t get together in person. But the internet has made somethings, like group therapy, more accessible, at a time when people need it most.
Caitrin McKee: My anxiety went through the roof.
Jodie Fleischer: Caitrin McKee says being out of work, worry about her aging parents in New York, and just general concern for others, was getting harder to handle.
Caitrin McKee: I was just really struggling with the news and seeing predictions of what was going to happen, how bad things could get.
Jodie Fleischer: From her Arlington apartment, she went online looking for help and found the Counseling Center of Maryland. She spotted this ad on their page for a free session and logged on.
Caitrin McKee: I just thought that’s absolutely the kind of thing that’s needed, right now.
Jodie Fleischer: The therapists have already hosted 29 free Zoom sessions for an hour every Monday, Wednesday and Friday morning. Licensed counselor Marjorie Kreppel says between 20 and 30 clients join each time.
Marjorie Kreppel: We’re all in this together, but yet, so many people were feeling very much alone in it.
Jodie Fleischer: She says others are struggling with spending so much time with their partner or children. Developing better ways to communicate has become critical.
Marjorie Kreppel: There’s definitely a lot of conflict. There’s nowhere to go.
Jodie Fleischer: Maybe you didn’t realize how much you relied on escaping to the office, or other commitments, even social activities, as a way to avoid your own emotions. She says facing them is an opportunity for growth. And she’s telling clients to stop putting so much pressure on themselves.
Marjorie Kreppel: It doesn’t mean your goals are put on hold. It might be that we’re going about accomplishing them differently.
Jodie Fleischer: Participants can keep their video turned off and don’t even have to use their real name. They’ve had medical professionals, had first responders, struggling with the silence when the adrenaline stops, workers who’ve lost jobs and employers who’ve had to let workers go.
Marjorie Kreppel: You just never know what’s going to get brought into the room each time.
Jodie Fleischer: A Kaiser Family Foundation poll found nearly half of adults felt their mental health had already been negatively impacted due to worry and stress over the virus. That was back in early April.
Caitrin McKee: It’s helpful to know I’m not alone.
Jodie Fleischer: Caitrin says she’s been joining the free groups about twice a week, sometimes talking, sometimes listening. When she says something valuable to another participant, it also helps her own outlook.
Caitrin McKee: Yeah, I’m very grateful. I think that it’s a wonderful thing that they’re doing.
Jodie Fleischer: The group setting means participants can see what others are experiencing, which might put their own problems in perspective. Plus the fact that it’s free, means even those who are struggling, financially, can take part. Jodie Fleischer, News4 I-Team.
444 Views

Next up on blog